6 things you should tell new hires in orientation 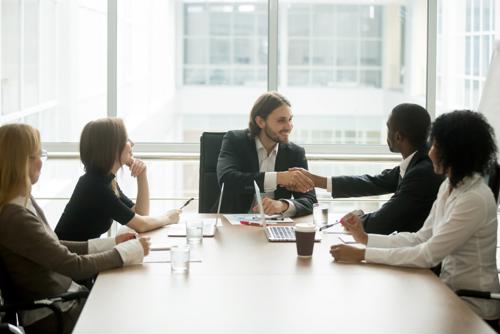 When your company makes a new hire, you may have a lot of issues to consider. As a hiring manager, you need to make sure those new people are put in a position to succeed from the word "go" and can hit the ground running to become positive contributors to your entire organization.

The following steps during their orientation and onboarding processes should help set them - and you - up for success:

1) Tie their roles to the bigger goals

Often, when you make a new hire, they're going to have a fairly good idea of how their job works and what they need to do - but what they may not know is how that job relates to broader goals for their department, or the entire company, according to Betterteam. For that reason, you need to be ready to explain how their role positions them to be an important cog in a bigger machine, and what resources exist to make sure everything interacts as smoothly as possible.

2) In meeting important team members, show them the culture

Certainly, no two companies are the same - and that's also true of how they tend to operate, Betterteam said. Your new hire may be coming straight out of college and not have the clearest idea of what a high-functioning company culture looks like, or they may be coming from another business that has a completely different culture from yours. You're undoubtedly having new hires meet with their team members during orientation, and much of those discussions should be around what it takes to succeed within your business.

3) Explain how they should use their software

While many professionals are familiar with the common software systems that power their jobs and make them more effective, they might not know the ins and outs of every platform your company uses, according to TalentLMS. Giving them time and training to play around in any programs they're not familiar with will help them integrate seamlessly.

4) Be clear about who's responsible for what

Many companies have complicated or unconventional hierarchies for how individuals or teams are managed, so it's important for new hires to get a clear picture of your management ecosystem, TalentLMS added. That way, they know exactly who to go to with specific concerns, as well as what they and their direct coworkers are tasked with handling on their own from one day to the next.

5) Show where everything is

Whether you're a huge company with hundreds of employees packed into a sizable office building or a small enterprise operating out of a single room, new employees have to get the lay of the land, according to Localwise. An in-depth tour of your facility will help new workers know exactly where to go for whatever they need.

6) Remind them you're always available for questions

Finally, keep in mind that no one can be expected to get the full grasp of your operations in even a few days' worth of orientation, Localwise advised. As such, you should encourage workers to ask you questions as they arise over the first few months on the job.